Chairman Gets Fund-Raising Off To A Flier!

Home / News / Posts / Chairman Gets Fund-Raising Off To A Flier! 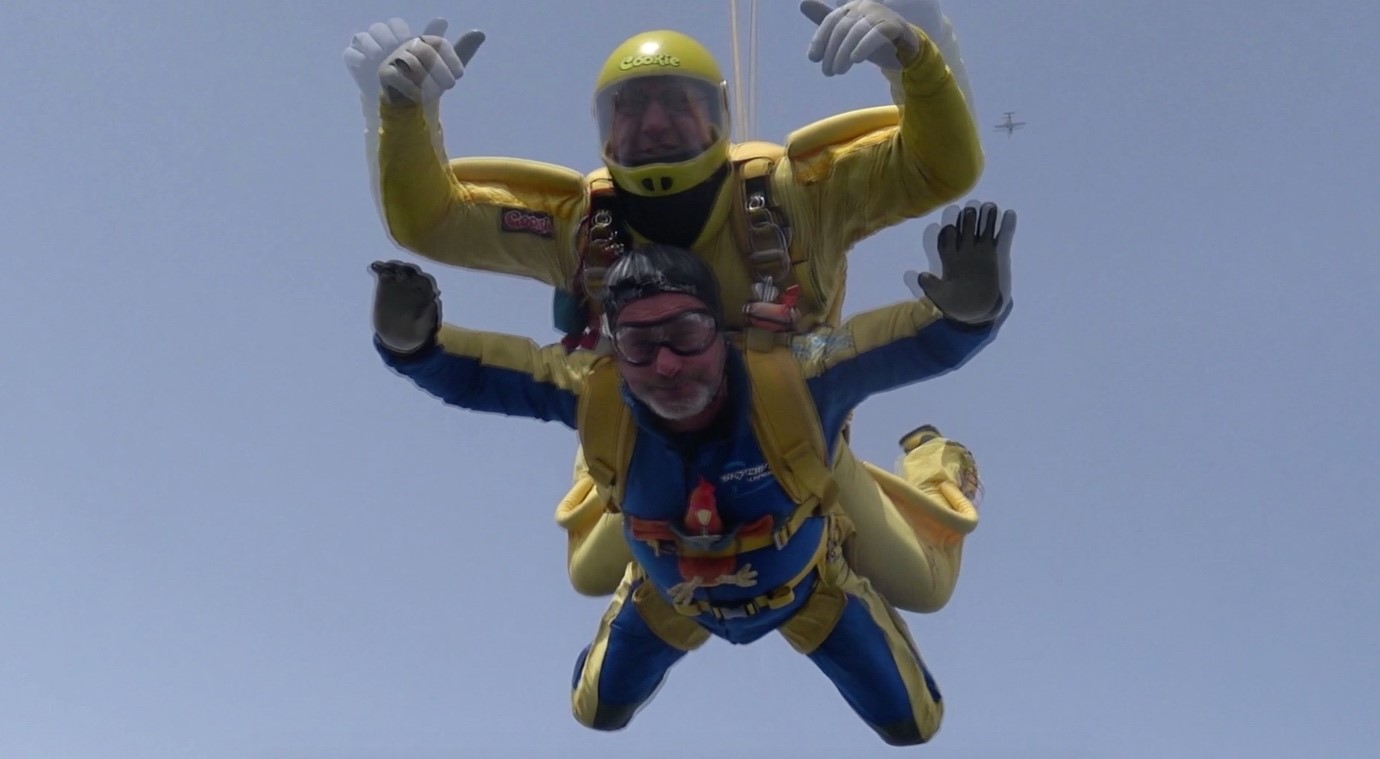 MAYBE it wasn’t anything like that fateful drop behind enemy lines during the Battle of Arnhem 73 years ago . . . but Friends of the Tenth Chairman Alec Wilson recognised the significance of experiencing a parachute jump.

As well as gaining some idea of what it is like to drop from the skies, Alec’s mission was to raise funds for the Friends of the Tenth memorial and remember Myrtle the Parachick with his tandem skydive at Langar Airfield in Nottinghamshire.

The £582.00 he collected in sponsorship as a result was one pound for each member of the 10th Battalion, the Parachute Regiment stationed in Somerby and surrounding villages before they were sent to Arnhem in September 1944.

They were accompanied by Myrtle on that Market Garden operation, a red hen adopted by the Battalion who was killed in action at Arnhem where she was buried on the battlefield with full military honours and wearing her Para Wings.

Therefore, Alec thought it would be appropriate to have a toy hen strapped to him as he leapt from the plane with his instructor.

“It was a brilliant experience, something everyone should try,” commented Alec, the son of Pte. Alec Wilson of the 10th Battalion. “My family thought it was time for me to experience what it was like dropping from the sky.

“Having said that, it was nothing like my dad’s drop into Holland, while being shot at by every weapon the German defenders on the ground could lay their hands on; small arms, machine guns and even anti-aircraft fire.”

Alec was accompanied by Dave from Skydive Langar who helped to make it an unforgettable and painless experience.

“It was a beautiful day and from 13,000 feet the panorama over Nottinghamshire was amazing,” he recalled after the drop.

“I asked the instructor to let me know when we descended to 500 feet, which is the height from which my dad jumped.

He added: “It’s unbelievable, it seemed as though we were almost on the ground at that height. The thought of everyone below shooting up at you with any weapon they could find is terrifying.

“It’s amazing that so few paratroopers were hit and killed or wounded on that descent. When Dad landed on the heath it was fully on fire, an inferno almost. It is very, very sobering and gives a tiny inclination of what those brave boys endured.”