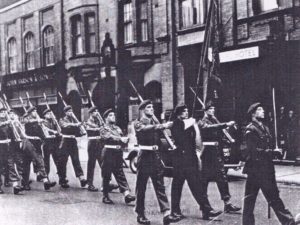 THE INAUGURAL meeting of the Branch was held on Friday October 14th, 1947 at the Bricklayers Arms; Sixty or so ex-Paras attended.

In 1944, prior to emplaning for Arnhem, the 4th Brigade of The Parachute Regiment was stationed in Leicestershire, the Tenth Battalion in and around Somerby, the 11th at Thorpe Satchville and the 156 Battalion in Melton Mowbray.

Many members of the Brigade had married local girls and stayed in the area, so they attended the first meeting together with ex Paras who had returned to Leicestershire after their demobilization.

The first committee was formed at the meeting. It comprised: Rex Choudury as Chairman, W. Williams as Secretary and E. Boyling as Treasurer.

Committee members were Jim Finn (Assistant Secretary) and J. Lowes (Deputy Chairman). Meetings were to be held twice a month on the first and third Fridays. The subscription was 6d per week. The following meeting was held at the Hind Hotel on London Road, a dance was agreed to be held at Somerby Village Hall on January 18th, 1948.

Coaches were laid on for members, the cost of transport was three shillings and admission two and sixpence. The band cost four pounds and five shillings.

On Friday 26th January, the Treasurer, E. Boyling absconded with the Branch funds of £18! Jim Finn was appointed Treasurer in February 1948. He held the position for 49 years and became, possibly, the longest serving Secretary of any PRA branch in the UK.

For his service to the branch, Jim was elected a Life Member.

A grand Airborne Dance was held at the Palais de Dance on February 15th, 1948, arranged by Jim Finn and Tom McEwan.

Although the hall held 800, only 300 people turned up. The Branch was out of pocket by £20, but in true airborne spirit and with subtle negotiation, they persuaded the manager to let them off payment for the hall as well as paying for two policemen and one fireman.

A new committee was elected at the AGM of 1950. Rex Choudhury was Chairman, Tom McEwan Vice Chairman, Jim Finn Secretary and Tommy Lees as Treasurer.

Over the years the headquarters of the Branch has changed. In order, they were; The Bricklayers Arms, The Hind Hotel, The Barley Mow, The Griffin and The Jubilee. In 1960 HQ was moved to the Richard III in Highcross Street and remained there until 2004, a total of 44 years. Our hosts at the Inn were Jack and Elsie Thompson and then their son Roger and Rosie his wife.

Because of the many enjoyable years spent there, in our hearts this will always be our home.

On Sunday October 26th, 1958, the first Branch Standard was dedicated at Leicester Cathedral and carried by Fred Botting.

On that occasion, support from Aldershot included a Battalion Band, a contingent of serving soldiers, Major Norman Nicholls and RSM Duffy.

The troops stayed over the weekend at Ulverscroft Road Barracks.

Leicestershire and Rutland is the ‘spiritual’ home of the 4th Parachute Brigade. 156 Para, 10th Para and 11th Para, who were all based in the area during 1944 prior to emplaning for Operation Market Garden, which is more commonly known as The Battle of Arnhem, the battle for ‘The Bridge Too Far’.

The Leicester branch has, therefore, always had a nucleus of veterans from the 4th Brigade.

The commemoration and remembrance services at Somerby (10th Bn) and Melton Mowbray (156 Bn) are both key events for the Leicester Branch.

Today, the Branch meets on the first Sunday of every month at 11.00 hours at the Conservative Club on Westcotes Drive.