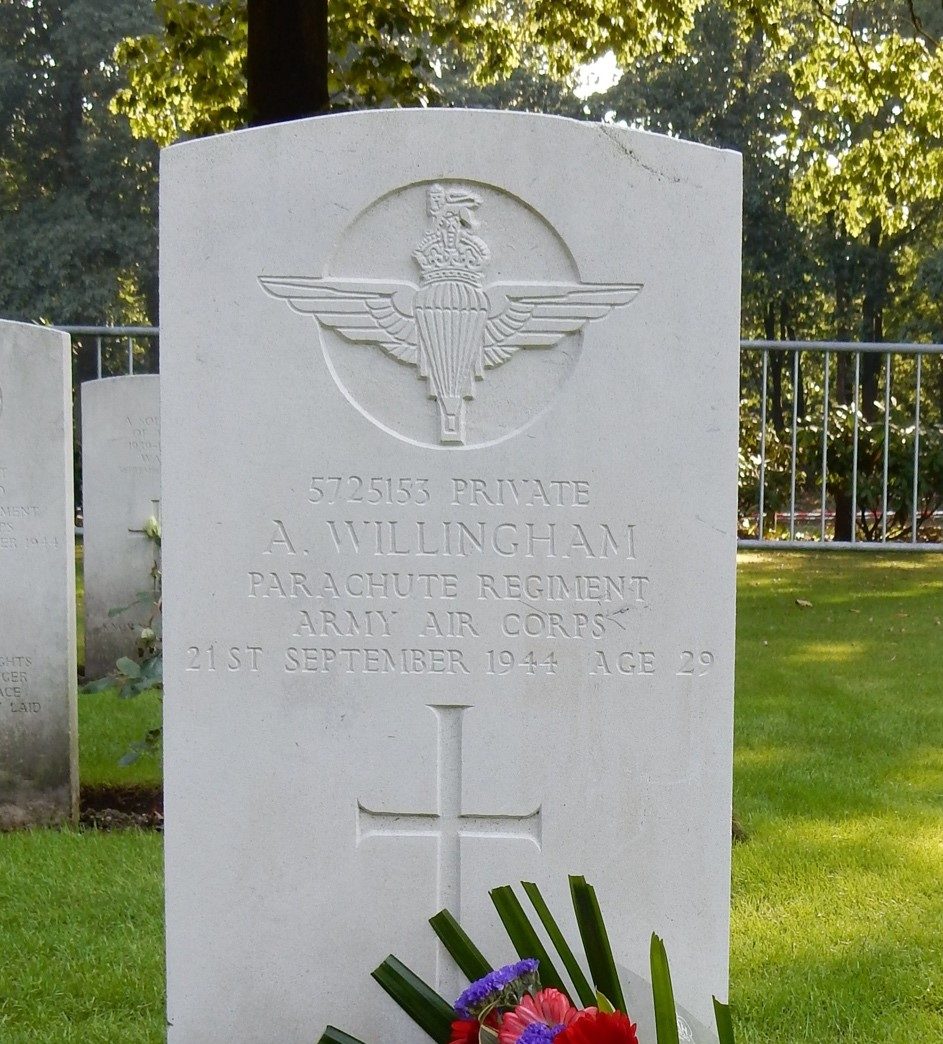 For 74 years, Albert Willingham has remained one of the unsung heroes of Arnhem. In my opinion, the actions bringing about his death on 21st September 1944, should have brought him recognition of the highest order – yet he received no award of any kind.

I first became aware of him when researching my father’s time at Arnhem (actually, of course, Wolfheze and Oosterbeek). My Dad, Pte. Alex Wilson was part of Chalk number 673, which carried a stick 18 men. Of those 18, a staggering proportion, one third or 6 men, were killed or died of their wounds! It is no wonder my Dad never spoke of those times.

Albert was, I’m told, the Colonel’s ‘minder’ and he certainly stuck close by his side until the bitter end. That end came in the cellar of 2 Annastraat. In that grim and bloody place was the badly wounded CO and Major Peter Warr. It was the last HQ of the devastated battalion. But also sheltering there were some 20 Dutch civilians, including Mrs Bertje Voskuil and her 8-year-old son, Henri. As German infantry won ground and took the house, a stick grenade was thrown down the cellar steps. Immediately Pte. Willingham jumped between Bertje and young Henri, protecting them from the inevitable blast – and lost his life in the process.

Nearly 75 years later, Dilip Sarkar MBE, the prolific author, historian and Fellow of the Royal Historical Society, is about to ensure that Albert Willingham gets the recognition he deserves. Firstly, Albert is one of the forgotten heroes in Dilip’s new book ‘Arnhem 1944: The Human Tragedy of the Bridge Too Far’. Secondly, Dilip, who has Albert’s family’s full cooperation and support, has liaised with the Parachute Regiment and initiated a special commemoration for Albert in Oosterbeek next year. I think that I speak for all the Airborne community and the relatives of ‘that manner of men’ that fought at Arnhem, when I say that we wish Dilip every success in this endeavour.

I can’t wait to read Dilip’s book and have pre-ordered a copy. I urge all of our ‘Friends of The Tenth’ to do the same.

You can pre-order by clicking on this link: