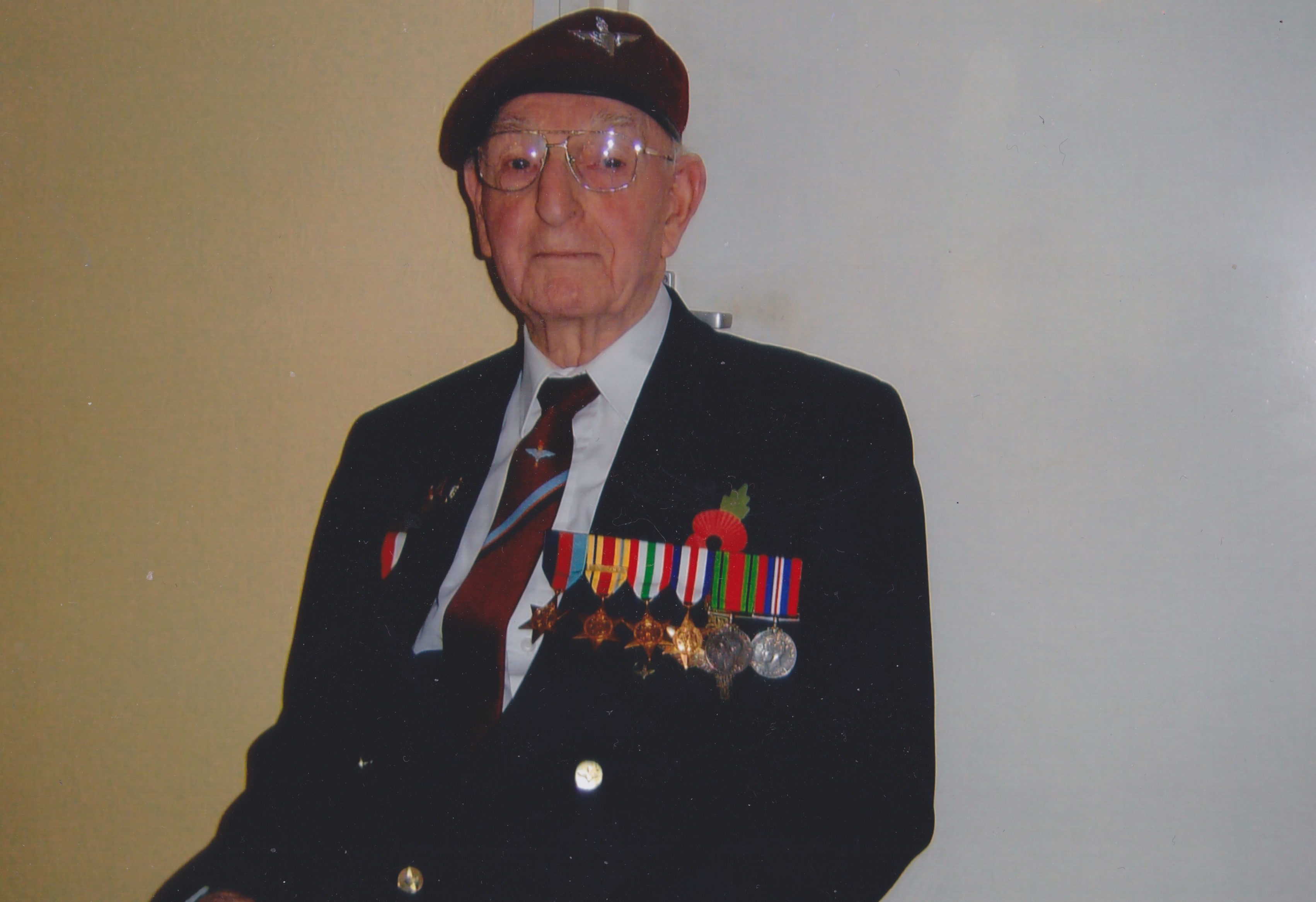 Henry was born in East London in 1919 and joined the Army just after the outbreak of World War II.

By late 1942, Henry was in action with the 8th Army in the North Africa campaign against Rommel’s Afrika Corps including the successful 2nd Battle of El Alamein in October/November of that year.

In January 1943, while Henry was stationed in Egypt that he decided to join the newly formed fledgling 10th Battalion Parachute Regiment which had been raised the previous month, making him one of the, 200 or so, band of ‘Originals’ of the Battalion. He undertook his jump training with 4 Middle East Training School at Kabrit, Egypt during January 1943.

Shortly after his basic jump course had finished, the entire Battalion was relocated with the 4th Para Brigade to Ramat David in Palestine.

On 9th September 1943, Henry landed at Taranto in southern Italy (a seaborne operation) as part of the invasion of mainland Italy. Henry was heavily involved in the assault on Castellaneta town against German SS forces where Henry was to lose a number of his pals from A Company as part of the successful attack. A few days later, the Battalion were again tasked to take the small town of Gioia del Colle and the adjacent airfield. The Battalion found they were again facing stiff opposition from the 1st SS Fallschirmjaeger (parachute) Division. Nevertheless, the Battalion successfully took the town and later, with its ‘sister’ Battalion the 156th, secured the valuable airfield which became operational with Allied fighter aircraft within a matter of days, to support the advance against a retreating enemy.

The 10th Battalion was withdrawn from the Mediterranean theatre in November 1943 and were sent back to the UK to prepare for the invasion of Europe, arriving at Somerby, Rutlandshire in December 1943 where Henry and the rest of A Company were billeted in the stables of The Grove at the end of Somerby High Street for the duration of their time in the UK whilst preparing for Operation Market Garden.

During his time at Somerby, Henry, as did many of the men during their time back in the UK, married his sweetheart bride, Winifred Brooks, in East London, on Sunday, the 23rd July 1944 during a weekend leave pass and returned to the Battalion shortly afterwards.

The Battalion were on constant standby to support the rapid Allied advance across France following the breakout from Normandy after the D-Day landings. Henry was experience over 15 cancelled airborne operations (many of which were cancelled as they sat in the aeroplanes on the airfields!) before the 1st Airborne Division were eventually put into action.

Henry’s day in battle was to arrive on the afternoon of the 18th September 1944, when he and the rest of 3 Platoon under the command of Lt Leslie Kiaer and Platoon Sergeant Sgt Harry Houghton, dropped onto the Ginkel Heide drop zone, Arnhem as part of the Second Drop on day 2 of the battle. It was a ‘hot’ landing zone having been partly occupied by enemy forces the previous day.

Under fire during their decent, Henry and A Company were into immediate action on landing, during which time several men of A Company lost their lives whilst securing an occupied wood nearby the Battalion RV point

The following day, A Company were heavily involved in the assault against the SS-Sperrlinie (blocking line) which had been formed by SS Troops to prevent the 4th Parachute Brigade from advancing toward Arnhem and the relief of the beleaguered 2nd Battalion holding out at the Arnhem Bridge. After a fierce and costly battle against the Sperrlinie, the Battalion were tasked to withdraw to secure the Wolfheze rail crossing to protect the rear of the 4th Parachute Brigade’s withdrawal into the shrinking Divisional perimeter forming around the Hartenstein Hotel.

In the overnight confusion and dispersal of the 10th Battalion during the night of the 19th/20th Henry and some 200 other men from the Battalion were taken prisoner of war by advancing German forces.

Henry was taken into captivity and initially sent to Stalag 12A at Limberg. He remained as a Prisoner of War for the next 7 months before finally being liberated and safely repatriated back to the UK. However, during his time in captivity, his wife Win, received the dreadful notification from the War Office that Henry was classified as ‘Missing- presumed dead’.

On demobilisation, Henry and Winfred, enjoyed a full life together, moving to live at Bennetts End in Hemel Hempstead, where he worked as a Rectification Fitter for Leyland for 27 years and in the evening took work as a Painter and Decorator. Henry was a practical man, who worked hard throughout his life and was keen on DIY

In the 1970’s, Henry and Win moved to Newport in the Isle of Wight where Win’s health deteriorated, and Henry became her full-time carer. Sadly, Winifred was to pass away a few years before Henry.

Henry was also a member of his local Bowls Club and also The British Legion. He regularly marched on Armistice Parades proudly sporting his maroon beret which always attracted a lot of attention!

Although his wife was in poor health Henry did manage to attend 10th Battalion reunions in Leicestershire and was able, on one occasion, to take part in the annual Pilgrimage to Arnhem, following which, friends and neighbours recall him relating his experiences in Arnhem during the visit and that he was “over the moon” about the visit, talking non-stop for two hours….until his wife rang to check that Henry WAS actually still with them !

Henry was a genuinely lovely man and also extremely popular with his parachute regiment comrades.

Henry passed away peacefully at the great age of 99 years, in October 2018 in the Isle of Wight and will be greatly missed by all those members of the wider 10th Battalion fraternity who knew him.

Compiled by Grahame Warner and Jeanie Holland, Friends of The Tenth