Derek Chambers – A great ‘friend of the Tenth’ 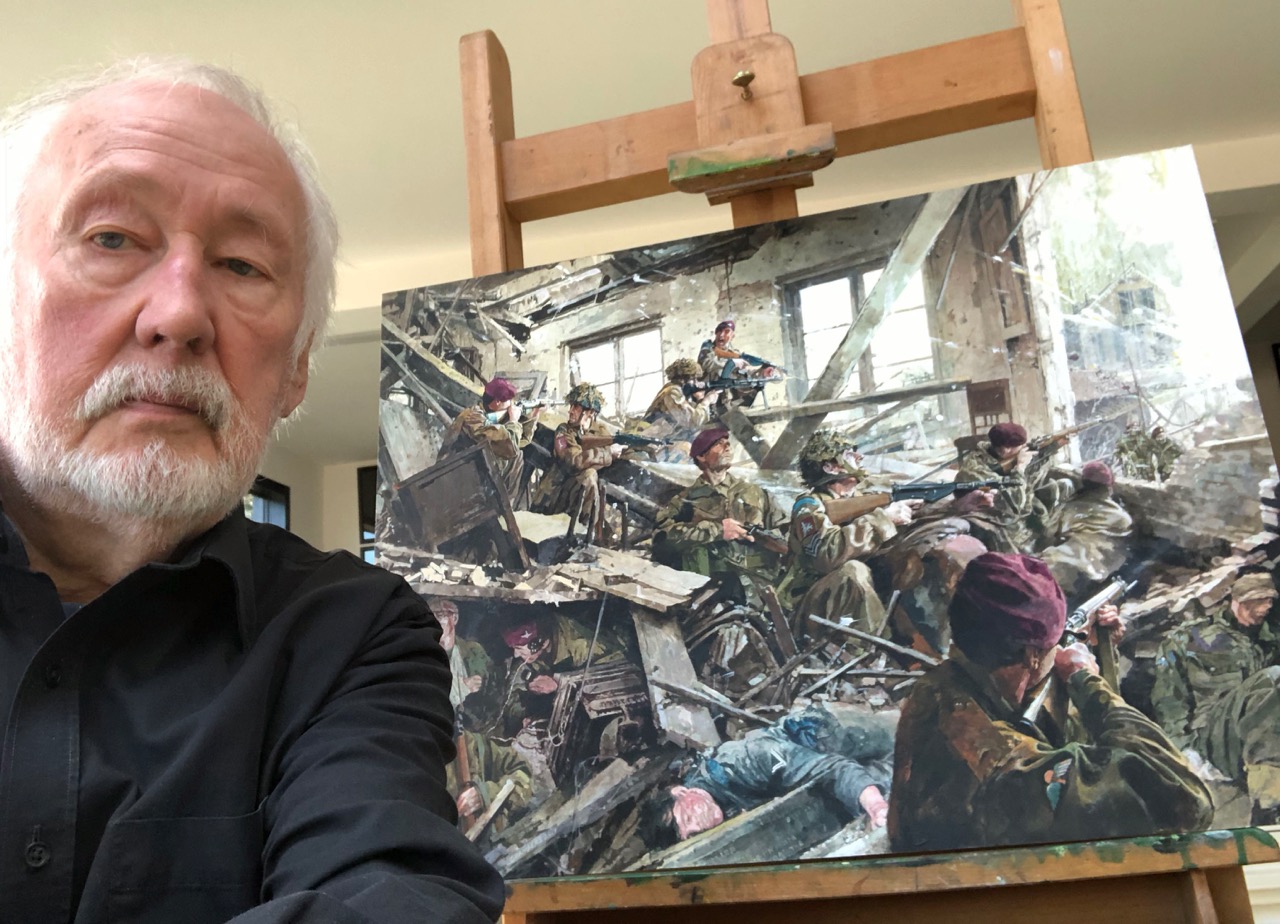 Derek Chambers is a self-taught painter. His natural talent and gift for scale and perspective shines through in works like ‘The Call-On, Isle of Dogs c.1950’. His one-man exhibitions aside, his art, created in an astonishing range of media and materials, has been shown at the Royal Academy of Arts, the Royal Watercolour Society, the Royal Society of Portrait Painters, the Royal Society of Marine Artists and the Mall Galleries, to name a few venues.

The Suffolk-based artist never joined the armed forces but his twin sons John and Peter served respectively with 10 PARA (V) and 2 REP. Their father has produced several paintings for The Parachute Regiment and associated clients. His first work was the oil painting hanging in the 2 PARA Officers Mess at Regimental Headquarters PARA in Colchester, depicting the final stages of the fighting in Helmand Province, Afghanistan in 2008.

Chambers recalls: “A subject quite out of my comfort zone, not having any military knowledge. My son John’s friend Nick Mys, who was the Adjutant of 2 PARA, commissioned the painting for the Officers Mess.

“I  have two sons –– twins though not identical –– who like to jump out of aeroplanes and, basically, it’s all their fault. They’re fifty-eight now. John, who is a member of the Parachute Regimental Association, joined 10 PARA. Peter, around the age of twenty, joined the French Foreign Legion as a paratrooper. He served in Sarajevo.

“My father, with whom I did not have a particularly close relationship, was a regular soldier. He joined the Bedfordshire and Hertfordshire Regiment at the age of seventeen in the 1920s and ended up as a Regimental Sergeant Major. He served in North Africa and Italy during the Second World War and also in Palestine. He talked a lot to my sons — a generation skip!“.

Derek Chambers’ next military-related painting was a  posthumous portrait completed in 2013-2014 of the historian and author Brigadier Professor Richard Holmes CBE TD, who died in 2011. Holmes was, amongst other things, aide-de-camp to Her Majesty The Queen from 1991 to 1997, during which time he was promoted Brigadier. Chambers’ portrait of Holmes hangs in the Defence Academy in Swindon.

“The portrait of Richard Holmes was commissioned by Andy Harrison. [Chambers is speaking of then Brigadier Andrew Harrison DSO MBE, who is currently a Lieutenant General and Colonel Commandant of The Parachute Regiment — Ed] Then, in February 2016, Lieutenant Colonel Duncan Mann asked if I could paint another commemorative oil, of an action in North Africa; this was ‘The Battle of Tamera’, completed in August 2018.

“It was my son Peter who was responsible for the next painting: ‘The Last Stand’. He was in Sudbury with his brother one day, raising money for the PRA, when he met someone to whom he said: ‘I’ll ask my Dad if he could paint a little watercolour to commemorate the seventy-fifth anniversary of Arnhem. This was how I became acquainted with Grahame Warner and Alec Wilson.”.

The resultant oil painting depicts the last stand of the 10thBattalion, The Parachute Regiment in Oosterbeek during the final stages of the Battle of Arnhem in September 1944. Spike Hunter, who served with 2 PARA and 10 PARA (V) and jumps with the Pegasus Display Team in WW2-style 10th Battalion uniform, advised and modeled for Chambers in his capacity as an authority on Second World War British Airborne uniforms and kit.

Chambers says: “I am currently working on a painting for Lieutenant Colonel Mark Swan at Colchester. I think he has moved on now. The subject is Operation Varsity. Like The Last Stand, Spike Hunter also helped with his endless supply of arms and original clothing.”.

Spike Hunter told Hermes: “Derek is an amazingly talented artist. Having two paratrooper sons gives him a unique insight. We did the photo shoot for The Last Stand in my front room with me and Charles Feddon, 3 PARA. And John Chambers, 10 PARA, one of Derek’s sons. One of the models for Derek’s forthcoming Operation Varsity painting is Jes Nicholls, ex-10 and 2 PARA. His uncle was actually present during this action near Haminkeln.”.

Alec Wilson, whose father fought with the 10th Battalion in Italy and at Arnhem, paid tribute to Chambers: “It was a challenging time in 2018, when we were introduced to Derek. We had to raise more than one hundred thousand pounds to pay for the 10th Battalion Memorial and Garden at Burrough on the Hill.

“Derek offered to create a painting, not only to help with our fundraising, but also to remember and honour the valour of the Battalion. Entirely at his own cost, he visited Oosterbeek and met with Dr Robert Voskuil to research the battle scene, ultimately producing this remarkable painting.

“10th Battalion veteran Victor Gregg — who now rests beside the Memorial as its ‘Eternal Sentinel’ — said of Chambers’ painting: ‘The scene the artist has created with his brushes is about as true and factual as could ever be expected.’. The sale of the original work and limited edition prints raised over £35,000 for the Memorial — a testament to Derek Chambers’ generosity.”.

Derek Chambers produced a portrait of The Tenth’s last man standing, Victor Gregg, shortly before Gregg died. Chambers says: “I suggested the portrait of Victor Gregg before he died. I just made it. He was a man I had met and much-admired.”.

Grahame Warner’s book on the destruction of the 10th Battalion at Arnhem –– Arnhem: Eight Days to Oblivion –– is in its final editing stages. The cover artwork, adorning a dustcover designed by Chambers, includes a haunting painting of a 10th Battalion medic tending to a wounded comrade in the woods around Oosterbeek.

Warner, whose uncle was killed in action with the 10th Battalion at Arnhem, told Hermes: “Derek Chambers has captured the brief and the tone for the book perfectly; the futility of the battle, the loss of so many and the action around the woodlands of Oosterbeek. His skills are truly remarkable. I will be forever in his debt and proud to be associated with him for this fine work and his permission to use the image for the forthcoming book.”.

Chambers was a good choice for the dust cover design. Leaving his Secondary Modern school at fifteen in 1952, he got a job as a messenger in a London advertising agency. “I took evening classes at St Martin’s School of Art. In all, I worked for five advertising agencies, the last being Lintas as Creative Director in 1962.”.

Having learned the craft of graphic design, Chambers formed a creative consultancy partnership with a Lintas copywriter in the latter’s Mayfair  home in London in 1962. “We moved to Covent Garden in the late ‘sixties. We had many clients. Covent Garden was bursting with design groups. We formed a new partnership –– Burton Soar Chambers –– in Soho in 1977, on Shaftesbury Avenue. Two designers and a business-getter. As well as graphic design, we worked in photography and illustration. Our last major job was the Docklands Light Railway in 1987; signage for trains and stations, all the system documentation and graphics. I semi-retired in 1992 and began painting.